In the late 1800’s the lush grasslands of Johnson County became a battleground where cattle barons and homesteaders faced off over grazing rights in a violent competition for control of the open ranges in the Powder River Country. 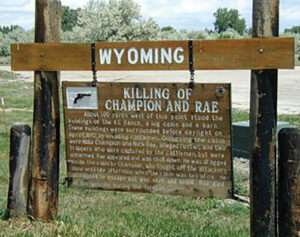 The cattle barons, long established throughout the vast plains, were beginning to see their engrained grasp on the lands fade away as homesteaders began settling small ranches throughout the county. Also known as the War on Powder River and the Wyoming Range War, conflict over land was a somewhat common occurrence in the development of the American West when large portions of the frontier were being settled by Americans for the first time.

In the earlier days of settlement, much of Wyoming’s land was public domain and available for open range stock raising as well as new settlers. Mass cattle would be released upon the open range by large ranches, with the intent to hold a fall or spring roundup. During these roundups, cows and calves alike would be claimed and branded. With the land not belonging to any one rancher in particular, these new arrivals would brand the free range cattle before they could be rounded up. Obviously, this caused quite a stir among the already established outfits, as they saw this to be an act of rustling (livestock theft).

The Wyoming Stock Growers Association (WSGA) began to take action against these small operators, employing stock detectives, and hired guns like former Johnson County sheriff Frank Canton and Pinkerton agent, cattle detective Tom Horn, to seek out “rustlers” and kill them. With more than 50 hired gunmen led by Canton, who were to be paid $5 a day plus a bonus of $50 for every rustler killed, the Invaders embarked on an expedition into Johnson County where they were to “shoot or hang” some 70 county residents and officials named on a list compiled by the stock organization.

In April of 1892, the stock detectives, 23 Texas gunmen and a former union army officer were employed by the ranchers and took a train from Cheyenne into Casper, along with a few members of the WSGA. From there, the Invaders rode towards Buffalo armed with a list of supposed rustlers, with a plan to take over the town and administer their idea of “justice”. After cutting the telegraph line to keep word from spreading, they headed north from Casper with supply wagons following.

The first target of the WSGA was Nate Champion at the KC Ranch, a homestead rancher who was active in the efforts to organize a competing spring roundup with other small ranchers, a month ahead of the roundup scheduled by the WSGA.

The Northern Wyoming Farmers and Stock Growers Association had been formed by small stock growers in response to the monopoly of the WSGA. The Invaders traveled to the KC ranch late in the night, surrounded the buildings and waited for daybreak. Two men who were spending the night on their way through were captured as they emerged from the cabin, while Nick Ray was shot while standing inside the doorway of the cabin and died a few hours later. 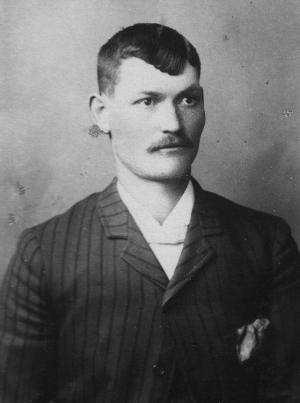 Nate Champion, who ran a small herd of cattle in the Hole-in-the-Wall country, was murdered by the invaders of Johnson County April 9, 1892. Courtesy Jim Gatchell Memorial Museum.

Champion, surrounded and barricaded inside his log cabin, prosed a few final thoughts before his demise. “Boys, I feel pretty lonesome just now. I wish there was someone here with me so we could watch all sides at once.” The last journal entry read: “Well, they have just got through shelling the house like hail. I heard them splitting wood. I guess they are going to fire the house tonight. I think I will make a break when night comes, if alive. Shooting again. It’s not night yet. The house is all fired. Goodbye, boys, if I never see you again.”

With the cabin a blaze, Nate Champion stashed his journal in his pocket before running out the back door with his pistol in one hand and a knife in the other. As he emerged he was shot by four men and the invaders later pinned a note on Champion’s bullet-riddled chest that read “Cattle Thieves Beware”. Two passers-by noticed the ruckus and local rancher Jack Flagg rode to Buffalo to warn the sheriff who gathered a posse of over 200 men and set out for the KC.

The invaders holed up at the T.A. Ranch south of Buffalo, Wyo. Courtesy Jim Gatchell Museum.

HOLED UP AT THE TA RANCH

Making their way to Buffalo, the group passed a horseman that warned them Sheriff Red Angus was on his way with armed men. In an attempt to avoid an ambush, the Invaders holed up in a log barn at the TA Ranch. Nearly a week after the start of this battle, the governor of Wyoming sent word to President Harrison pleading for aid from the federal government.

The President authorized military action and within 24 hours, three troops of cavalry rode into the TA Ranch, arresting the Invaders and escorting them back to Fort McKinney. The remaining Invaders were later taken to Cheyenne, but Johnson County was not yet stable enough financially to thoroughly pursue charges. The Invaders were released without punishment, bringing a most anticlimactic end to one of the most monumental battles of the Wild West. 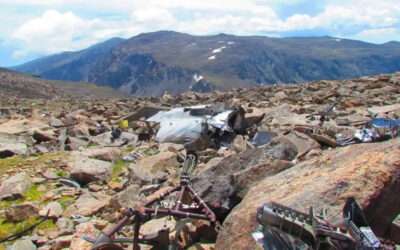 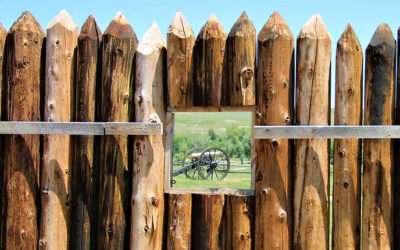 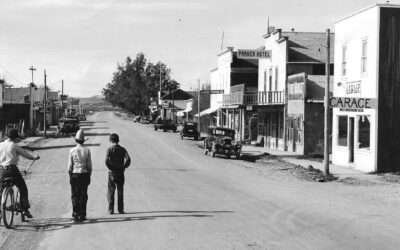